Pazzi per la Pizza will be accompanied by an outstanding husband and wife team from New York:

Charles Scicolone is the wine director at the I Trulli restaurant and wine bar with an all-Italian wine list, and the wine consultant at Vino, an Italian wine and spirits shop, both in New York City. For five consecutive years Charles and the staff at I Trulli have been nominated for outstanding wine service and wine list by the James Beard Awards. He has written articles for publications such as Eating Well, House Beautiful, Gourmet, McCall’s, and Wine Enthusiast, and has lectured on Italian wines for the Italy America Chamber of Commerce, the Agricultural Ministry of the Region of Sicily, and La Cucina Italiana Magazine.

Charles has also taught wine tasting classes for The Taster’s Guild, Peter Kump’s Cooking School (now ICE), Cooking by the Book, La Cucina Italiana, and De Gustibus at Macy’s in New York City. He has appeared on national television on Emeril Live!, In Food Today, Ciao Italia, and Cooking Live and is a member of the Wine Media Guild.

Michele Scicolone is the highly respected author of several cookbooks, including the blockbuster bestsellers The Sopranos Family Cookbook and Entertaining with the Sopranos. She has written for Gourmet, Bon Appetit, Prevention, and The Wine Spectator. Michele has appeared on the CBS Morning Show, Good Morning America, and Cooking Live, which she has also hosted.

Michele’s other titles include A Fresh Taste of Italy, Italian Holiday Cooking, La Dolce Vita, Savoring Italy, The Antipasto Table, and Pasta, Noodles & Dumplings, part of the new Williams-Sonoma Mastering cookbook series. One of her latest books, 1,000 Italian Recipes, features a wealth of recipes for traditional and regional Italian specialties and was nominated for a prestigious James Beard Award. Michele teaches cooking classes at schools around the country and visits Italy several times a year.

Together Charles and Michele wrote the best-selling and definitive work on the subject, Pizza: Any Way You Slice It!. The Scicolones share their easy-to-follow tips and shortcuts—from mixing, kneading, and shaping the dough to choosing the right toppings—so that anyone can make top-quality, authentic pizza from scratch. There are recipes for such classics as Pizza Margherita (tomatoes, mozzarella, and basil) and Pizza Marinara, and pizza American style, including New Haven White Clam Pizza and Chicago Sausage and Cheese Deep-Dish Pizza.

AFTERNOON: Lunch at a local restaurant (included). Drive along the Amalfi Coast on the winding road high above the sea with breathtaking views. Dinner at Da Gigino Università della Pizza—Pizza a Metro in Vico Equense (included). The pizzeria, with huge wood–burning ovens, was the first to offer pizza by the meter.

MORNING: Visit to Ravello’s colorful market in the main piazza. Demonstration cooking class with Mamma Agata, who has vast experience in traditional southern Italian cuisine and was, for many years, the private chef for Italian politicians, American celebrities, international film stars, journalists, and writers. The class takes place at her private home in Ravello, situated on a clifftop 1,000 feet above sea level with a spectacular terrace overlooking the majestic Amalfi Coast. The terraced gardens on the property, abundant with fruits and vegetables, provide many of the fresh, natural ingredients featured in her cooking. Lunch at Mamma Agata’s (included).

AFTERNOON: Guided walking tour of Ravello including Villa Cimbrone, with some of the most magnificent views on the Amalfi Coast, the gardens and meandering paths of Villa Rufolo, which inspired Wagner’s magic garden in the second act of Parsifal, and the town’s 11th–century cathedral. Late afternoon wine tasting at the Casa Vinicola Ettore Sammarco. The winery, started in 1962, was one of the first producers on the Amalfi Coast and work only the indigenous local grapes planted in terraces around Ravello. Dinner at a local restaurant (not included).

MORNING: Travel to the Feudi di San Gregorio wine estate for a property tour and wine tasting. Located outside of Avellino, in Campania’s Irpinia region, the winemaking facility is considered one of Italy’s most advanced and innovative estates. A recent multi–million dollar construction project resulted in a sleek, ultra–modern new structure. The complex includes a stunning aging cellar, gourmet restaurant, tasting room, wine shop, landscaped gardens, and even an outdoor amphitheater. Lunch at the on–site restaurant Marennà (included). Situated at the very top of the new winery, the restaurant offers stunning panoramic views of the valley vineyards.

AFTERNOON: Wine tasting at nearby Mastroberardino, one of the most historic winemaking families in Italy. The Mastroberardinos have been making wine for ten generations—since the early 1700s—and the winery has even begun an experimental vineyard at Pompeii using grapes similar to those that had originally been cultivated there. Dinner at a local pizzeria/trattoria (included).

MORNING: Travel south to Paestum for a mozzarella tasting at La Tenuta Vannulo, a water buffalo dairy that produces organic, raw–milk cheeses from its own herd of water buffaloes. Occasionally the dairy offers gelato al latte di bufala, made from water buffalo milk.

Guided tour of the Greek temples nearby, some of the best preserved in the world. Magna Graecia formed the southern part of the Italian peninsula, along with Sicily, which the Greeks dominated for centuries. Paestum (Poseidonia) was one such city, as were Naples (Neopolis) Cumae, and many more.

AFTERNOON: Lunch at a local pizzeria/restaurant (not included). Late afternoon shopping excursion to Vietri sul Mare, a ceramic–making center. Workshops, factories, and boutiques produce colorful, classic tableware and tiles, and everything in the village—from the fruit store to the town hall—is decorated with painted tiles. Dinner at Antica Pizzeria del Vicolo della Neve in Salerno (included).

MORNING: Transfer to Naples. Guided walking tour to explore the ruins of Pompeii, the ancient Roman market town frozen in time after the violent eruption of Mt. Vesuvius in 79 AD buried the town in pumice and ash. Highlights include a visit to the forum, public baths, bars, and villas.

AFTERNOON: Lunch at a typical Neapolitan pizzeria (included). Walking tour with local guide through the heart of the ancient city of Naples. Pass the Angevin Castle, one of the Bourbon Royal Palaces, before visiting the Cloister of Santa Chiara to view the cloister’s majolica tile work, and the Church of San Lorenzo, where visitors can walk down into the excavations revealing the Greek and Roman foundations of the city.
Also referred to as Spaccanapoli, the old Naples city center is home to Via San Gregorio Armeno, a narrow street crowded with hundreds of artisan workshops with colorful window displays and stalls overflowing with Nativity scenes. Dinner at a local pizzeria/trattoria (included).

MORNING: Guided visit to Reggia di Caserta, Italy’s largest royal palace and estate with spectacular gardens. The property, situated just north of Naples, was created by the Bourbon king Charles III in the mid–18th century to rival Versailles and the Royal Palace in Madrid and boasts over 1,000 rooms, grand staircases, and several richly adorned royal apartments. The vast surrounding park is a showpiece in itself, with fountains, ornamental waterworks, statuary, and an English garden.

AFTERNOON: Lunch at a local pizzeria/trattoria (included). Tour and tasting at the Caputo wine estate in Teverola, widely recognized as an important agricultural center. Located in the heart of Campania between Naples and Caserta, this area is better known as the Terra di Lavoro, or “land of work.” Dinner at a local pizzeria/trattoria (not included).

MORNING / AFTERNOON: Day at leisure to explore Naples—shop on Via Chiaia or in the Vomero district for fancy boutiques, stroll through Galleria Umberto I arcade, or walk through the lively Mergellina district or Borgo Marinai. Take time to visit of one of the many famous museums such as: Museo Archeologico Nazionale, one of the world’s top museums of ancient art that is a repository for objects found in Pompeii and other archeological digs around Vesuvius; or the Museo di Capodimonte, a former palace that now houses one of Italy’s finest collections of art.

For the adventurous there’s Napoli Sotterranea, a fascinating tour through underground tunnels, caves, and foundations. Dating back to the 4th century BC, the hidden excavations have served as quarries, tombs, aqueducts, cisterns, and even bomb shelters during World War II. Near the Piazza del Plebiscito and Palazzo Reale take a break for a delicious pastry or buffet lunch at historic Caffè Gambrinus, a great place for people–watching. Lunch and dinner on your own (not included).

MORNING: Tour the island of Capri via boat. Circumnavigate the entire island and visit the most spectacular grottoes characteristic of the island, such as the Blue Grotto (conditions permitting), Green Grotto, White Grotto, and around the famous Faraglioni Rock formations. Provided the seas are calm, travelers will be able to go into the Blue Grotto and to climb up into the White Grotto.

AFTERNOON: Lunch at a local restaurant (included). Walking tour to see the highlights of Capri and Anacapri together. Take the funicular from Marina Grande up to Capri and walk to the Gardens of Caesar Augustus. Visit the gardens and museum of the Villa San Michele. Return to Naples and dinner at a local pizzeria/trattoria (included).

Guided tour of the Certosa di San Martino, which has a dazzling array of artistic and architectural wonders. The museum features masterpieces of the Neapolitan Baroque and the world’s finest collection of Nativity figures. The monastery has the most spectacular views of the entire city, its bay, the Sorrentine peninsula, and Vesuvius. Lunch at a local pizzeria/trattoria (not included).

AFTERNOON: At leisure to revisit a favorite site, do some last-minute shopping, explore more of Naples, and fare le valigie (pack your suitcases). Farewell dinner at a local pizzeria/trattoria (included).

Buon Appetito
Mention Napoli and the first food that comes to mind is pizza. Neapolitans are also devoted to pasta: maccheroni, spaghetti, vermicelli, fusilli, perciatelli, and ziti, among others. Seafood is a mainstay of the Neapolitan diet, especially those fish and shellfish that go well in antipasto and pasta or deep fried in a gran fritto di pesce. The Gulf of Naples abounds in clams, mussels, tender young octopus, shrimp, and anchovies.

The large, thick–skinned lemons of Sorrento and the Amalfi coast are renowned as the source of the liqueur called limoncello. The marshy lowlands around Capua and Salerno yield the ultimate in mozzarella di bufala campana.

Naples, Italy’s 3rd-largest city, is arguably its most colorful and certainly its most chaotic. Underneath Vesuvius the streets of Naples teem with activity, where Italians eat, work, play, and gossip. Here the amazing architectural monuments are the backdrop to street markets, small shops, and lively neighborhoods. The narrow streets of the old city are home to a treasure trove of churches and palazzi.

The capital of Campania, Naples was founded by the Greeks, enlarged by the Romans, and invaded by foreign invaders in later centuries. And since Naples was once the center of a far-reaching kingdom, it’s not surprising that there are royal palaces and castles there as well. Il Mezzogiorno, the land of the midday sun, is also home to the pleasure island Capri, the historic ruins at Pompeii, and the stunning Costiera Amalfitana, south of Naples.

Over a century ago, local writer Renato Fucini promised that when the amalfitani go the heaven on Judgment Day, it will be a day like any other. Those who drive along the Amalfi coast still find it heavenly. The road from Sorrento to Salerno winds through quaint white villages built on steep angles, with one side of the village unfolding down to the cerulean water and the other rising up the mountainside. Inside each village, there are more delights for the senses: hand-painted tiles, lemons the size of grapefruits, leisurely lunches of grilled fish from the morning market, and a sea-sky so intensely blue it inspired Steinback to call Amalfi “a dream place.” 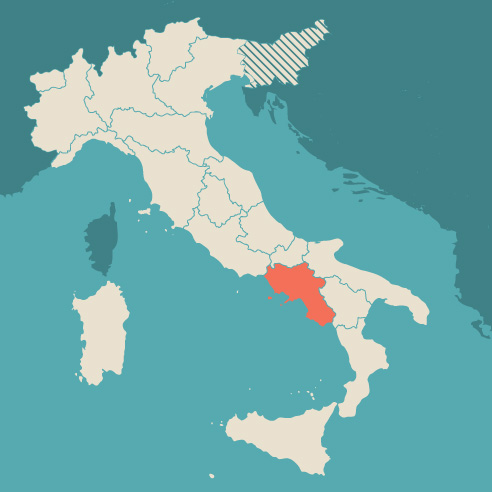 Dates: No dates available at this time.

Meals: All breakfasts; 6 lunches and 6 dinners