Here are some fun facts I’ve come across over the last few weeks:

• The name “Italy” comes from the Greek “italos”, which means calf. It was originally given to the region of Calabria by Greek settlers in the 8th century BC, and was extended to the whole peninsula under Roman emperor Augustus.

• Italy is the fifth most visited country in the world, welcoming some 46 million foreign visitors annually.

• Europe’s only three active volcanoes, Etna, Stromboli and Vesuvius, are all in the South of Italy. Mount Etna also happens to be the world’s most active volcano. It has been erupting on and off for the past 3,500 years, and spewing lava on a daily basis since 1999. [Adagio Travel says — come see Etna with us on one of our 2016 Sicily trips!]

• The popular ciao salute for “hello” or goodbye” comes from the old Italian expression “schiavo” meaning “at your service.” In modern Italian, “schiavo” means slave.

• There are two major classifications of pasta: pasta fresca (fresh) and pasta secca (dried). From here, there are more than 400 unique types of pasta: sheets, strips, long strands, cylinders, unique shapes, flavors, and many other local varieties. Average annual pasta consumption in Italy is 50 lbs per person. Pasta consumption is considerably higher in the center and south of the country than in the north, where risotto and polenta are more common. [Adagio Travel says — come eat lotsa pasta with us in southern Italy next May on our Amazing Amalfi adventure!]. We stay close to Gragnano, home of Italy’s most sought-after pasta, the bronze-cast spaghetti that “got soul”! 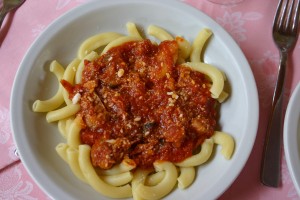 Why entrust your Italian journey to Adagio Travel?